Jeremy Shaw remembers Alejandro Fernandez and what made him such a special character.

The death of Alejandro Fernandez earlier this year was a huge loss to his family and to everyone in the world of wine. Iberian Wine Tours visited him at several of his wineries in Spain, including enjoying numerous long lunches in Pesquera with the King of Tempranillo. Here’s some of our thoughts and memories. 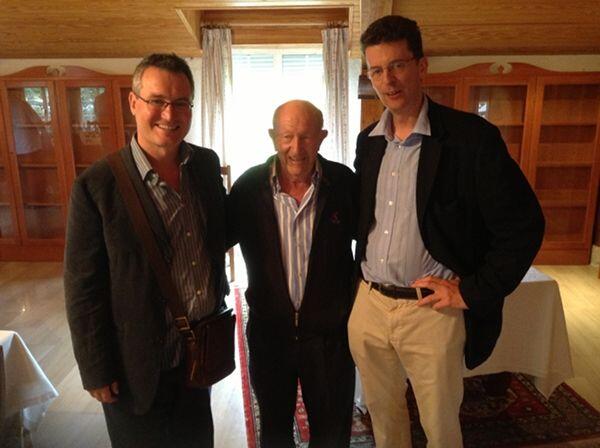 A day with Alejandro was always a day well spent. He was an invigorating force who opened the door to the future of Castilian wine at a time when barely anyone else was paying attention. Remarkably he enjoyed a successful career as an agricultural machinery salesman and carpenter before he turned seriously to winemaking at the age of 40. Back in his beloved Pesquera.

Pesquera is a dusty Castilian village not far from the Duero river. In the early 1970s, the tempranillo grapes may have been great but little else was conducive to serious wine making. In the dying days of Franco, transport infrastructure was poor and international markets very reticent to show interest in Spanish wines that weren’t sherry or Rioja. In 1974 only one wine interested Hugh Johnson in Old Castile, the mystical Vega Sicilia, a wine of kings and aristocrats a half hour’s drive from Pesquera.

Alejandro was motivated by simple pleasures. In the ageless Castilian village fiesta, it was common to try all the wines made in the village as the party started. When I asked him why he started making wine in a serious way when he turned 40, he confessed that at the village fiesta his wines were always judged to the best by the informal panel sitting on the hill housing the ‘cotarro de las bodegas’ . In this case bodega meant both the place the wine was made and stored. After Alejandro made some very good money with a beetroot harvester he created, his mid life ‘crisis’ prompted him to buy some vineyards in the village in 1972 and make wine in the traditional style.

However far his travels took him before and after that moment, his heart was always in Pesquera and the wines he made their were truly glorious. He had a very special way with the tempranillo grape, coaxing an intensity and balance into the barrel and glass that changed the image of Castilian wine and in particular the reds of Ribera del Duero. By the 1980s Robert Parker had come to lunch and awarded 98 points to one of Alejandro’s wines. He was happy but didn’t change the price on the bottle, ‘I make wine for everyone to enjoy’ was true to his origins at the fiesta on the hill.

The subsequent decades brought huge investment to Ribera, hundreds of wineries where there had been a handful, Antonio Banderas created his own label here, Norman Foster designed the Portia ‘James Bond’ style winery and Peter Sisseck conjured up Spain’s most ethereal red at Pingus. Alejandro progressed across Castile creating a 2nd Ribera wine at Condado de Haza, acquired a stunning estate at Dehsea la Granja, the source of the family’s cheese, olive oil, beef, lamb and chickpeas and a 250 year old cellar. He also developed a 4th estate in La Mancha where we eventually made Alejairen, his only white wine and finally a lovely hotel Pesquera a short drive from the village.

Through it all, Alejandro retained his star crossed humility, mixing with Rafa Nadal, Julio Iglesias and the king of Spain himself Juan Carlos on his travels and they all referred to him as the king of tempranillo. Sadly, at the very end he separated from his wife Esperanza and he looked from afar as the next generation took over. His imagination surely took him back to his beloved Pesquera just as it did when we he was a salesman on the road in the 1960s.

I was lucky enough to lunch with Alejandro multiple times at the winery. Life doesn’t get much better. We built up gradually to the suckling lamb ‘lechazo’ which would arrive with due ceremony at the table as Alejandro uncorked one of the rarer Pesquera wines and warned us all that you could drink as much as you liked with no fear of a headache but it might make you frisky. There was laughter, there was dancing and there was always a hearty rendition of the song dedicated to Alejandro about his nostalgia for the hill of Pesquera. I raise my glass to the king of tempranillo and dream of going back to Pesquera again, just like he did.

After a year without seeing Pesquera,

because my work got in the way,

I went up to the cellars on the hill

and how happily I went

And what a deep pleasure I felt

when Jacinto raised his jar and greeted me

to try this wine that sits in the cellar  .